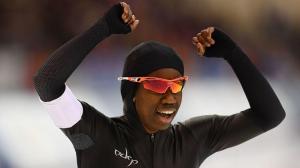 Go get those medals, girl!

Jackson joins Maame Biney, who recently became the first black woman to qualify for the speedskating team with her short-track finish in the 500 meters in Utah.

Both women follow the footsteps of Chicagoan Shani Davis, who was 19 years old when he became the first black athlete to qualify for U.S. Olympic speedskating team in 2002. He went on to win two gold medals in long track events and recently qualified for his fifth-straight Olympic Games during the trials at Pettit National Ice Center.

Jackson, a 25-year-old from Florida, has only been long-track speedskating for four months after switching over from dominating inline skating competitions where she was a three-time roller sports athlete of the year.

“I really wasn’t expecting it coming in,” she said in an NBC interview after the race. “Pretty cool.”