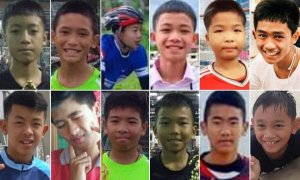 The best news to wake up to this morning. The boys are being rescued out of a Thailand cave. Be with them, Lord. Let everyone make it out alive.

Tham Luang caves, Thailand (CNN)Four boys who have been trapped inside a Thai cave for 15 days have been rescued, as authorities race against time to free the remaining members of the group.

Confirmation of the initial rescue was posted on the Thai Navy SEAL official Facebook page late Sunday.
The boys emerged approximately nine hours after a team of five Thai Navy SEALs and 13 international cave diving experts entered the cave to begin the treacherous attempt to accompany the boys one by one through the flooded, narrow tunnels

An ambulance leaves the Tham Luang cave area after divers evacuated some of the 12 boys trapped with their coach for 15 days.

Families of the boys have been waiting for hours for news since authorities announced the rescue attempt would commence at 10 a.m local time Sunday, as storm clouds threatened to dump more water on the flooded caverns, undoing efforts to drain them.

Previously, the entire round trip was thought to take roughly 11 hours to complete, but efforts to drain the tunnels of flood water appear to have shortened the journey time.

Ambulances are leaving the cave site where four Thai boys have been rescued #ThaiCaveRescue pic.twitter.com/BS4C8Kq76B

Twelve boys — aged between 11 and 16 — and their coach, were discovered by two British divers on July 2, nine days after they disappeared during an outing in the Tham Luang Nang Non cave complex, in Chiang Rai, northern Thailand.

Those still inside the cave are perched on a small muddy ledge four kilometers (2.5 miles) inside the cave, surrounded by flood water and with a limited supply of oxygen.