Erica Thomas, A Black US lawmaker says white man told her to ‘go back where you came from’ 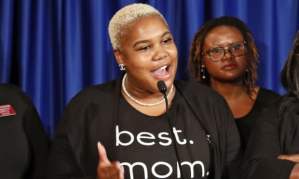 Be vigilant people!  It’s already started in Houston, Illinois, Georgia or a community near you. Black and Brown people are being targeted and told to ‘go back to your country’ by vile racist bigots. Trump has emboldened these racist thugs & they’re bubbling over with hate ready to instigate whether it’s at the gas station, grocery store or restaurant. Don’t be caught off guard.  Keep safe.

A pregnant African American lawmaker in Georgia said she was verbally attacked in a supermarket Friday by a middle-aged white man who used profanity, called her vulgar names and told her to “go back where you came from” as her nine-year-old daughter looked on.

Erica Thomas, a Democrat and Georgia state representative from Austell, said the man was irate that she was in an express line with too many items. Thomas said she was in a line for customers with 10 items or less because she cannot stand for long periods of time.

Thomas said she was stunned by his anger. “I said, ‘Sir, you don’t even know me. I’m not lazy. I’m nine months pregnant.”’

Thomas said she never identified herself to the man as a public official. She said she was so taken aback by his actions that she didn’t think to try to record them.

The incident came days after Donald Trump tweeted that four congresswomen of color, including the US congresswoman Ilhan Omar, of Minnesota, should go back to the “broken and crime infested” countries they came from.

In Thomas’ video, she alludes to Trump’s attacks on Omar. Thomas never mentions Trump’s name but says, “There’s so much hate in this world and it’s being incited by our president every single day.”

A Native Texan who adores baby kittens, loves horses, rodeos, pomegranates, & collect Eagles. Enjoys politics, games shows, & dancing to all types of music. Loves discussing and learning about different cultures. A Phi Theta Kappa lifetime member with a passion for Social & Civil Justice.
View all posts by SouthernGirl2 →
This entry was posted in Uncategorized and tagged 'go back to where you came from', 3chicspolitico.com, Go Back To Your Country, ImpeachTheMF, Politics, racial hate, Racism, Send Her Back, State representative Erica Thomas, Trump's vile hate. Bookmark the permalink.

13 Responses to Erica Thomas, A Black US lawmaker says white man told her to ‘go back where you came from’