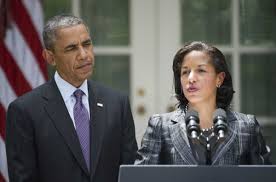 Susan E. Rice was born on November 17, 1964, in Washington, D.C. She went on to study at Stanford University and the University of Oxford in Oxfordshire with a focus on international affairs. She worked with President Clinton as part of the National Security Council and oversaw African affairs, later working at the Brookings Institution. In 2009, she joined President Obama’s Cabinet, receiving Senate confirmation to be U.N. ambassador. In 2013, she was appointed national security adviser by Obama.

U.N. Ambassador and foreign policy adviser Susan Elizabeth Rice was born in  Washington, D.C., on November 17, 1964, to parents Lois Dickson Fitt and  Emmett J. Rice. Rice’s family is well renowned among the Washington  elite; father, Emmett, is a Cornell University economics professor and  former governor of the Federal Reserve System, while mother Lois is an  education policy researcher and guest scholar at the Brookings  Institution.

Growing up, Rice’s family often spoke of politics  and foreign policy at the dinner table. Her mother’s job also brought  notable figures through the house, including Madeleine Albright, with  whom Rice’s mother served with on a local school board. Albright would  later become a pivotal figure in Rice’s personal and professional life.

Rice  attended National Cathedral School, a prep academy in Washington, D.C.  She excelled in academics, becoming her class valedictorian, and showed  her aptitude in the politic realm as president of the student council.  She also loved athletics, competing in three different sports, and  became a star point guard on the basketball team.

After  graduation, Rice attended Stanford University in Palo Alto, California.  In college, she pushed herself to excel. She not only earned  Departmental Honors and University Distinction, but also became a Harry  S. Truman scholar, was elected to Phi Beta Kappa and earned a Rhodes  scholarship. She turned the heads of top administrators when she created  a fund that withheld alumni donations until the university either  stopped their investments in companies doing business in South Africa,  or the country ended apartheid.

After receiving her bachelor’s degree in history in 1986, Susan Rice went on to attend University of Oxford in Oxfordshire, England. Here, she earned her M.Phil and D.Phil in international relations, and wrote a dissertation that examined Rhodesia’s transition from white rule. Her paper won the Royal Commonwealth Society’s Walter Frewen Lord Prize for outstanding research in the field of Commonwealth History, as well as the Chatham House-British International Studies Association Prize for the most distinguished doctoral dissertation in the United Kingdom in the field of International Relations.

She finished her schooling in 1990, and started work as an international management consultant at McKinsey & Company in Toronto, Ontario, Canada. On Septmber 12, 1992, she married her Stanford romantic interest, Ian Cameron, who was working as a television producer in Toronto for the Canadian Broadcasting Corporation.

The couple lived in Canada until 1993, when Rice took a job with the National Security Council in Washington, D.C., under President Clinton.