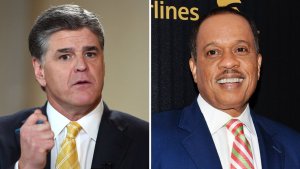 Well, that’s one way to win a cable news punditry argument. CNN is reporting that longtime Fox News host Sean Hannity pulled a gun on his colleague Juan Williams after the two had finished an on-air political argument, with Hannity even going so far as to turn on the laser targeting system and putting the red dot right on Williams, horrifying those on the set. Moreover, Hannity is now admitting the incident happened but is trying to downplay it.

The gun incident happened last year, and it was seen as so troublesome that it was escalated all the way to a Fox News co-president before subsequently being buried. At this point Fox, Hannity, and Williams are all trying to claim that Hannity was merely showing off how the gun worked after they’d had an on-air political argument about guns. They’re also all claiming the gun wasn’t loaded at the time. But it raises the question of why the hell Sean Hannity was carrying a gun while he was on the set of Fox News.

Hannity is trying to explain it away by stating that he has a conceal carry permit in some states. But in so doing, he’s admitting that he is (or was) doing a television show on the set of Fox News with a gun on him, and was presumably walking the halls of his workplace with a gun. It was CNN who broke this story today, after three sources inside Fox News brought the story to CNN. It’s unclear why the Fox News sources are coming forward now. But again, Fox and Hannity are now admitting that the gun incident happened; the above CNN link includes their statements.