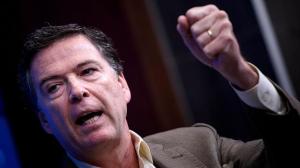 Former FBI Director James Comey called on Americans to vote for Democrats in the midterm elections.

In a tweet Tuesday night, Comey – a longtime Republican who distanced himself from the party in April – slammed the GOP for not standing up to President Trump.

“This Republican Congress has proven incapable of fulfilling the Founders’ design that ‘Ambition must … counteract ambition,’” he tweeted. “All who believe in this country’s values must vote for Democrats this fall.”

“Policy differences don’t matter right now,” he added. “History has its eyes on us.”

Comey’s comments come the day after Trump’s joint press conference with Russian President Vladimir Putin, in which he refused to denounce Russia for interference in the 2016 election, and criticized his own intelligence agencies.

Trump walked back the comments Tuesday, reading a prepared statement in which he claimed that he misspoke when he said that he did not see any reason why Russia would have interfered in the 2016 election.

“I don’t see any reason why it wouldn’t be Russia,” Trump said Tuesday. “It should have been obvious. So you can put that in and I think that probably clarifies things.”

Comey, who was fired by Trump in May 2017, said in April that he was leaving the Republican Party because of the president.

“The Republican Party has left me and many others,” he said. “I just think they’ve lost their way and I can’t be associated with it.”