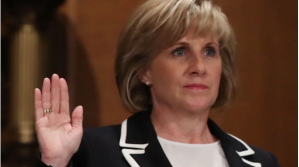 A top Housing and Urban Development official is due to leave the agency Thursday following disagreements with other officials about the Trump administration’s attempt to block recovery funds for Puerto Rico, The Washington Post reports. Deputy Secretary Pam Patenaude, second-in-command at the agency, officially submitted her resignation on Dec. 17 after Trump reportedly wanted to cut off Puerto Rico funding because he believed the territory was using the funds to pay off debt, according to the Post. Trump reportedly told then-Chief of Staff John Kelly and then-Office of Management and Budget Director Mick Mulvaney that he did not want a “single dollar” going to Puerto Rico, and wanted more money to go to Texas and Florida. According to the Post, Patenaude then had a meeting with White House officials and insisted that HUD get proper oversight over the funds.

“I didn’t push back,” Patenaude told the Post. “I advocated for Puerto Rico and assured the White House that Puerto Rico had sufficient financial controls in place and had put together a thoughtful housing and economic development recovery plan.” Patenaude also reportedly disagreed with the ending of an Obama-era program that provided funds to end racial segregation in communities, although she told the newspaper she was not “mad at the administration.”