Fiona Hill, the former director for Europe and Russia on the National Security Council (NSC), and David Holmes, a top staffer at the US Embassy in Ukraine, are set to testify before House investigators in the fifth day of public impeachment hearings on Thursday.

Hill was the top adviser on Russia in the White House until she left the administration over the summer.

Her testimony could offer the clearest picture of how National Security Adviser John Bolton responded to shadow efforts to pressure Ukraine to launch investigations into President Donald Trump’s rivals. Bolton, who has refused to testify, was apparently extremely disconcerted by these efforts, according to Hill’s closed-door testimony.

The Russia expert testified privately that the former national security adviser said he didn’t want to be part of whatever “drug deal” that US ambassador to the EU Gordon Sondland and acting White House chief of staff Mick Mulvaney were “cooking up” with regard to Ukraine. 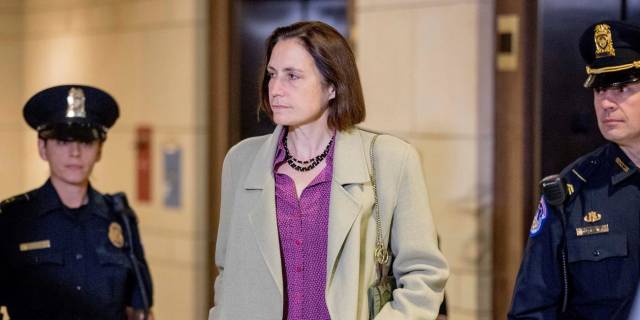 Bolton did not initially realize the extent to which Trump’s personal lawyer, Rudy Giuliani, was involved in these matters, Hill said.

Hill said Bolton described Giuliani as a “hand grenade that is going to blow everybody up,” and instructed her to communicate with the NSC’s lawyer about the efforts to pressure Ukraine to launch the investigations.

She offered a particularly scathing assessment of the smear campaign against former US Ambassador to Ukraine Marie Yovanovitch that ultimately led her to be removed from the diplomatic post.

The removal of Yovanovitch as the top US diplomat to Ukraine was a “result of the campaign that Mr. Giuliani had set in motion,” Hill testified. She said there was “no basis” for removing Yovanovitch.

The impeachment inquiry spiraled out of a whistleblower complaint that centered around a July 25 phone call in which Trump urged Ukrainian President Volodymyr Zelensky to launch investigations into former Vice President Joe Biden and his son, Hunter Biden, as well as a baseless conspiracy theory about Ukraine interfering in the 2016 election.

The White House released a memo that summarized the call. Hill said she was “very shocked” and “very saddened” when she read the memo.

Hill is a widely respected academic and expert on Europe and Russia, directing the Center on the United States and Europe at the Brookings Institution from 2009 to 2017. She began working in the Trump administration in April 2017, and also served as national intelligence officer for Russia and Eurasia at the National Intelligence Council from 2006 to 2009.

Holmes, who testified to House investigators in a closed-door hearing last week, was a last-minute addition to the list of witnesses in this week’s impeachment inquiry schedule. As a top staffer at the US Embassy in Ukraine, he’s worked closely with Yovanovitch as well as another key impeachment witness — acting US Ambassador to Ukraine Bill Taylor.

In his closed-door testimony, Holmes told House investigators that he overheard Sondland mention investigations in a July 26 phone call with Trump, which was one day after the infamous phone call with Zelensky. He was sitting with Sondland at a restaurant in Kiev at the time of the call.

Holmes testified that he overheard Sondland tell Trump that Zelensky “loves your ass,” and that the Ukrainian president planned to move forward with “the investigation.”

“I then heard President Trump ask, ‘So, he’s gonna do the investigation?’ Ambassador Sondland replied that ‘he’s gonna do it,’ adding that President Zelensky will do ‘anything you ask him to,'” Holmes said.