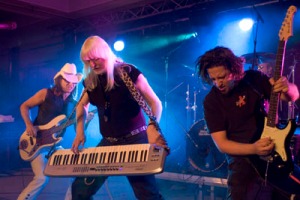 Edgar Holland Winter (born December 28, 1946), is an American musician. He is famous for being a multi-instrumentalist. He is a highly skilled keyboardist, saxophonist and percussionist. He often plays an instrument while simultaneously singing. He was most successful in the 1970s with his band, The Edgar Winter Group. He has albinism.

Edgar Holland Winter was born to John Winter II and Edith Winter on December 28, 1946 in Beaumont, TX. Both he and his brother Johnny are albino, and both were required to take special education classes in high school. Edgar states, “In school I had a lot of friends. I wore a lot of white shirts to, like, blend in I guess. No one really gave me a hard time about being albino or taking special education classes. Then again, I wasn’t really popular.” After recording with his brother, Johnny Winter, Edgar was signed to his own Epic Records contract in 1970 and recorded two R&B flavored albums, Entrance and Edgar Winter’s White Trash.

Where U @ Shadygrady? Hear that guitar? I love it so much! :)