When The Person Going “Rogue” is a Brotha 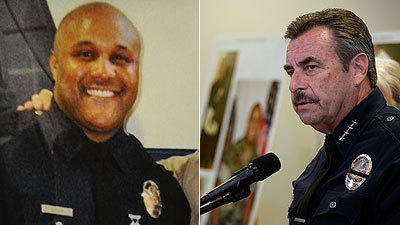 I got this from my friend the Field Negro this morning.  And just like Field, I don’t like it when one of ours goes rogue.

But, I guess if you’ve been screwed over by Los Angeles’ finest (aka LAPD), we might understand, but we still don’t like it. From the Field:

So this LL Cool J look-alike is picking off cops and innocent civilians out in L.A.

This is not good. I don’t like when you Negroes go rogue. (Especially not big bald headed ones.)Cops already have the trigger finger and they are shooting innocent people who aren’t even big bald headed black guys. (If you happen to be reading this in the L.A. area and drive a Nissan Titan, you might want to put that bad boy in the garage for awhile.)

This dude is doing his best John Allen Muhammad impression, because according to his manifesto, the LAPD did him wrong. Like Muhammad, this Christopher Jordan Dorner fellow was trained in the military, and like Muhammad, he clearly has some other issues.

According to Dorner’s manifesto, LAPD not only fired him for what appeared to be some whistleblowing activity on his part, but then when he tried to get justice for himself through the courts, he got knocked down, there too. Here’s an excerpt:

Dammit, this couldn’t have come at a worse time.  And an innocent child is among his victims in his quest for revenge.  While I believe what he’s saying about LAPD, brotha, this isn’t the way to GO.  White folks who love their guns and fighting the guvmint to not only keep them, but be allowed to get one without a background check to see if they’re too crazy to own one; they will now have this incident as an excuse to arm themselves against big, bald-headed brothas like Christopher Dorner.  Dorner’s actions also probably ensured some racial profiling in the future, in terms of whether or not a brotha can join the police force without intensive psychological scrutiny that no one else is even going to undergo.  Besides, Tom Bradley is probably rolling over in his grave, after all he did and experienced to make sure a brotha could carry a gun and a badge in LA.

Of course the Police Department is dismissing Dorner’s manifesto as “self-serving” and ramblings on the Internet.  Maybe if they had paid attention?

The rage-filled “manifesto” written by former police officer Christopher Dorner before he went on an alleged cop killing spree around the Los Angeles area was dismissed by the head of the Los Angeles Police Department today as “self-serving” and “ramblings on the Internet.”

When a brotha or sista goes rogue, they don’t realize how much worse they make it for the rest of US.  However, I’m not sure if the LAPD hasn’t had this coming, what with the late Rodney King and what they did to him 20 years ago.  “Chicken’s coming home to roost” as Malcolm X once said.

Still, going rogue doesn’t do ANYONE any favors, regardless of their complexion, unless, as Paul Mooney would say, “you have the protection of the complexion…”

Like Loading...
This entry was posted in Uncategorized and tagged Christopher Dorner, Going Rogue (not the Grifter's Book), Gun Control, LAPD, Whistleblowing. Bookmark the permalink.

95 Responses to When The Person Going “Rogue” is a Brotha