COLUMBUS (WCMH) — The Columbus police officer who was seen on video kicking a suspect in the head Saturday morning was identified as one of the officers involved in the shooting death of Henry Green last year.

According to Columbus police, Officer Zachary Rosen is under investigation for the incident that took place on April 8. Officer Rosen has been reassigned to non-patrol duty indefinitely.

Rosen was one of two officers involved in the June, 2016 shooting death of Henry Green. A grand jury recently declined to indict Rosen and Officer Jason Bare for that shooting.

The incident started Saturday along the 3100 block of Maize Road. Columbus police officers were investigating a report of a man threatening to “shoot up the house and everyone in it,” according to a police report.

According to court documents, police chased the suspect south from the home on Maize Road. Officers caught up with him in the 800 block of Weldon Avenue.

Video posted to YouTube by Roiesha Pettiford shows a portion of the arrest. The suspect, Demarko Anderson, appears to be on the ground with an officer on top of him. Another officer comes from outside of the frame and kicks Anderson in the face.

After the kick, Anderson is heard on the video demanding to speak to a supervisor. 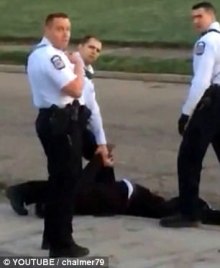 “The guy was on the ground already. He already had restraints on him. What is the point of continuing to stomp him out on his face? What was the point of that? There is no need. You already got him down. He can’t move. He can’t do anything else,” she said. “That seems more like a fight like you’re trying to hurt someone, to me.”

Anderson was arrested and charged with aggravated menacing, resisting arrest, obstructing official business, having weapons under disability and possession of controlled substances.

Columbus police released the following statement on the incident:

Based on what we see in the video taken on Saturday April 8, 2017, the action taken by one of our officers does not meet the standards by the Columbus Division of Police. It appears to be inconsistent with the values and training we instill in our officers.

We’ll learn more as the investigation continues and take appropriate actions based on the facts gathered.

The officer has been temporarily reassigned.