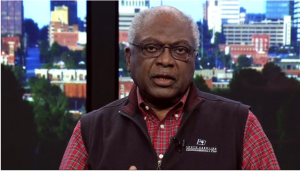 Washington (CNN) Rep. James Clyburn, a member of House Democratic leadership, said the Congressional Black Caucus, of which he is a part, is pursuing a censure resolution against President Donald Trump next week after the President’s vulgar remarks on immigrants Thursday.

“I am hopeful that we will do that and get bipartisan support for it,” he told CNN’s Wolf Blitzer in an interview Friday. “The President is the commander in chief and this is kind of conduct that would be ‘unbecoming of an officer.'”

He continued: “If a general or some other line officer in the military were to say something like this, he would be censured. It should occur here with the commander in chief at a minimum.”

Congress pursuing censure against the President would mean publicly reprimanding him as a formal state of disapproval.

Clyburn was referring to Trump’s comments during a meeting with congressional immigration negotiators where he referred to some African nations as “shithole countires.” In that meeting, he rejected a bipartisan deal on the Deferred Action for Childhood Arrivals program, an Obama-era initiative aimed at protecting young undocumented immigrants who were brought to the US as children. Trump, a person briefed on the meeting told CNN, also asked why the US wants people from Haiti in the US and added that the US should get more people from countries like Norway.

'I said my piece directly to (Trump) yesterday.'

Trump on Friday denied describing certain nations as “shithole countries.” He also denied demanding that Haitians be removed from negotiations about protected status for people from certain countries.

“The language used by me at the DACA meeting was tough, but this was not the language used. What was really tough was the outlandish proposal made – a big setback for DACA!” Trump tweeted.