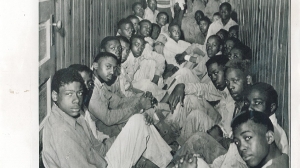 WRIGHTSVILLE (KATV) — For the last 5 decades, every year has been 1959 for Frank Lawrence. For the majority of his life, Lawrence has been trying to solve one of Arkansas’ greatest mysteries.

“No one ever knew it existed because the ability of the state of Arkansas to do such a fantastic job to cover it up,” said Lawrence.

March 5th, 1959, 69 African American boys, ages 13 to 17, including Lawrence’s 15-year-old brother Lindsey Cross, were padlocked into their dormitory for the night at the Negro Boys Industrial School in Wrightsville.

Around 4 a.m., a fire mysteriously ignited, forcing the boys to fight and claw their way out of the burning building.

It’s an event in history possibly forgotten or unknown by many, but it’s that moment that claimed the life of 21 boys.

“It was a carefully calculated murder that involved 21 boys but was designed to kill 69 that were housed inside of this dormitory,” said Lawrence.

Lawrence has made it his life’s mission to uncover the truth surrounding what he calls Arkansas’ “secret holocaust,” which coincides with the focal point of author Griffin Stockley’s latest work.

When the smoke cleared that March morning in 1959, the boys’ who burned to death were found piled on top of one another in the corner of the dormitory. The 48 who had survived managed to escape by prying off mesh metal screens from two windows.

“Most of the boys that were killed had run back to a corner of the building. If you look at the diagram, you can see that although there were a couple of doors, in fact we know there was no one there to unlock the doors,” said Stockley.

The horrific event briefly made headlines that also brought attention to the squalor and deplorable conditions in which the boys lived.

“The conditions were to a point where when 69 boys all go to bed at night, in a space barely big enough for them to move around and they are one foot apart from one another and you had to get up at night and go to the bathroom, they had to defecate in buckets,” said Lawrence.

“The boys went around in rags. They had one 30-gallon water tank for them to take baths,” said Stockley.

The boys in the school were committed for being orphaned, homeless or for committing offenses described as mischief and alleged petty crimes. The school and the treatment of the children became a fiery representation of segregation within the South during the Jim Crow Era.

“A whole part of this is our history with white supremacy and the way African Americans have been discriminated against historically in Arkansas. It was never separate but equal, it was always unequal,” said Stockley.

Now, almost 60 years after the horrific fire, both Lawrence and Stockley are writing books, hoping to spark a fresh look at the fire and its initial cause.

“The fact that it was in such deteriorated condition, that’s probably why the fire started, because of the wiring,” said Stockley.

So was it gross negligence that lead to the death of the boys or were they burned alive intentionally?

“Everyone wants to conclude that it was an accident to prevent putting more embarrassment on the state of Arkansas or Orval Faubus,” said Lawrence.

Lawrence believes the events leading up to the “Lost Year,” added fuel to the Wrightsville school’s flames.

Prior to the fire, Governor Faubus toured the Wrightsville school and saw firsthand the conditions in which the boys lived but made no recommendations for change. However, newspaper articles reported Faubus appeared disturbed by the death of the 21 boys, calling the fire, ‘inexcusable’.

Faubus immediately called for a hearing to determine who may have been responsible for deaths of the children.

“The science of preserving a crime scene was in existence in 1959. Yet the very morning these boys were killed, they were dismantling this whole scene with hoses, rakes and shovels. They were tearing it apart like they were trying to cover up something,” said Lawrence.

The school’s staff and Superintendent L.R. Gains all gave their accounts of what happened that night of the fire, noting that the boys had been locked in and left unsupervised for the night. Conversely, The Pulaski County Grand Jury found that numerous individuals and agencies were responsible, but ultimately, they returned no criminal charges.

“Unfortunately, it’s just like blaming everybody and nobody,” said Stockley.

In the meantime, in an ironic twist, the land in which the school stood is now the Arkansas Department of Correction Facility Wrightsville Unit where you won’t find a plaque to indicate the boys ever lived or died there.

The same omission exists at their supposed mass grave which can be found at the Haven of Rest Cemetery in Little Rock.

“The bodies was brought out here and a mass grave was dug with 1-14 and the bodies were interned there,” said Haven of Rest owner, Stephanie Webb.

According to cemetery records, hours after the fire, what little remained of the boys who died was taken to a local funeral home and their body parts reportedly wrapped in newspaper.

“Most of the bodies were brought to Dubuisson Funeral Home, which of course now no longer exist and as far as how they were received, there’s a lot of questionable stuff,” said Webb.

“The parents of the boys could just come in and pick out body parts al la carte and claim they were their children,” said Lawrence.

Seven of the 21 boys were buried privately by their families. The other 14 are supposedly buried in a mass grave, their brief funeral and burial paid for by the state of Arkansas.

“After the ceremony was over, the family members were ushered away from the cemetery and not allowed to view the interment into the burial plot, so they never saw coffins go into the ground,” said Lawrence.

According to Webb, the cemetery’s records indicate a bronze grave marker was purchased for the 14 boys a few months after their death, again by the state. However, she says she has never seen it, nor does she know where it is.

So what is the truth surrounding the death and burial of the Wrightsville boys? Lawrence and Stockley both hope their upcoming books expose the perception that Arkansas apparently put little value on those young boys’ lives.

“We have to feel some pain at some point about these things as oppose to dismissing them as kind of an academic exercise or part of our pathetic history of race relations in Arkansas, in the South,” said Stockley.

The Claims Commission ruled in September of 1959 to award the estates of each of the 21 boys $2,500, but Lawrence says his family only received $1,400 dollars. In the meantime, he hopes one day to gain the right to exhume his brothers remains and bury them in his family’s burial plot in Hensley, Arkansas.