Julián Castro on reparations for slavery 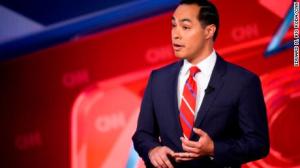 If elected president, 2020 Democratic contender Julián Castro said he would create a commission to explore the possibility of reparations for slavery.

During a stop Sunday at the South by Southwest Festival in Austin, Castro did not commit to paying reparations but said it should be part of a topic of conversation for a commission or task force that could explore that and other issues surrounding the nation’s history with slavery.

“I’ve long believed the country should consider reparations because of the atrocity of slavery,” said Castro, a former San Antonio mayor who was President Barack Obama’s Secretary of Housing and Urban Development. “I also believe that we’re never going to fully heal as a country from the racial divide until we’ve addressed the tremendous wrong that was done with slavery.”

Former Obama cabinet official and current Democratic presidential candidate Julian Castro crushed rival Bernie Sanders‘ argument against “writing a check” for reparations, noting that Sanders’ solution to a host of other issues is to do just that.

On Sunday morning’s edition of CNN’s State of the Union, host Jake Tapper asked Castro for his reaction to a clip of Sanders responding to a question about support for slavery reparations by asking what his rivals mean by reparations.

Castro noted that he has promised a “task force” to explore reparations, but zeroed in on a different Sanders remark on reparations. In a recent appearance on The View, Sanders said that “our job is to address the crises facing the American people and our communities, and I think there are better ways to do that than just writing out a check.”

1 Response to Julián Castro on reparations for slavery